Aftermarket crash parts—also referred to as “non-OEM parts,” “imitation parts” or “copy parts”—are produced and supplied by companies other than the original equipment (OE) manufacturer; in other words, non-OEM collision parts.

Some aftermarket companies may offer a lifetime warranty, but that alone does not make them equivalent to Original Equipment collision replacement parts in terms of quality and performance. Damage to your vehicle or its parts caused by the failure of new aftermarket collision parts may not be covered by your vehicle’s warranty.

Insurance companies often include the use of “imitation” or non-original sheet metal replacement parts on their estimates. They never actually call these inferior parts “imitations.” The fact of the matter is that these parts are not made to the same exacting standards as those from the Original Equipment Manufacturer (OEM). Rather than calling these parts what they truly are, insurers prefer friendlier terms and use their abbreviations in their insurance estimates to pass them off as quality parts to the uneducated consumer, such as:

“Quality Replacement Part” (QRP) or “Like, Kind and Quality” (LKQ). Aftermarket parts are made, usually from offshore companies based in overseas countries such as: Taiwan, China, Hong Kong, Indonesia, India, etc. by a poorly compensated, impoverished work force. 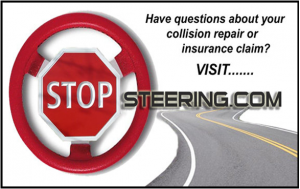 The process used to make aftermarket (A/M) parts is also inferior. The offshore manufacturers do not have access to the original molding, engineering designs, dimensions and tooling equipment so they use a “reverse manufacturing process”.  It’s a process where they take the part and make a mold; from that mold, they make the “die” or “stamp” for the imitation part. These additional steps used to achieve a “copy” leave room for additional tolerance (slop). It is not uncommon to have a variance of more than 10 millimeters on an imitation part when compared to a quality OEM piece of similar appearance.

Time after time, imitation parts have been shown to be inferior in terms of fit (typically evidenced by slotted holes or reworked body lines), overall finish (low grade primers), and corrosion resistance (demonstrated by salt spray testing). Independent studies (such as the one published in Consumer Reports® magazine in February of 1999) have consistently shown the inequities of these poor quality parts when compared to their original counterparts.